The Catholic Diocese of Peoria and Social Doctrine 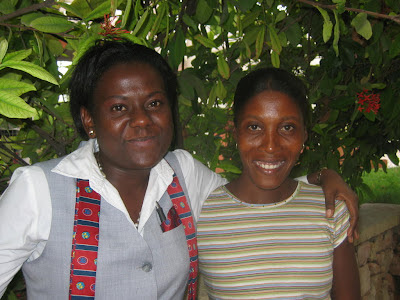 The two girls pictured to the right had surgery at OSF in Peoria several years ago. Both are 27 years old now and are in Haiti.

Jenny is on the left and Heurese is on the right.

Both girls live in Port au Prince. Jenny teaches at a school for children that are deaf. Heurese lives in a slum with her children aged two and four years.

I have written about both girls in the past.

I examined both of them last week in Haiti and both need heart surgery. OSF is refusing them care. Written communication several years ago from OSF’s lawyer, Doug Marshall, stated that OSF would no longer care for Haitian Hearts patients. Thus, Jenny and Heuruese will not receive the care they need and deserve from OSF. Their chances at long-term survival are minimal.

We have buried a couple of young Haitian Hearts patients in the last couple of years and most likely will bury more.

When I talked with Bishop Daniel Jenky about Haitian Hearts several years ago, he was very afraid to support the Haitian kids and go against OSF. Simply put, I believe that Bishop Jenky was concerned about alienating the Peoria area business community and did not want to hurt his Diocesan Capital Campaign in any way. He did not want to embarrass OSF.

The Ethical and Religious Directives for Catholic Health Care Services did not seem important to Bishop Jenky or to OSF. The Directives state that collaboration amongst Catholic health care providers is very important for the good of the patient.

Neither the Catholic Diocese of Peoria or OSF offered my Haitian patients like Jenny and Heurese any alternative.

I was totally astounded by the actions of OSF and the Catholic Diocese of Peoria and I still am in disbelief that their respect for these young Haitians lives is nonexistent.

The Catholic Post is the paper of the Peoria Diocese. Bishop Jenky is the publisher. The September 23, 2007 issue has an article entitled: Educators Urged to Teach Social Doctrine. A speaker named Jan Rosenhauer spoke to principals of Catholic schools in the Diocese of Peoria at King’s House. She made some very dramatic statements about the church’s social doctrine.

Some excerpts from the article:

“In her address, Rosenhauer described the roots and foundation of the church’s social doctrine, including Scripture and the teachings of popes.

“Among the key Scripture passages is the parable of the Last Judgment in the 25th chapter of the Gospel of St. Matthew. In that parable, Jesus says we will be judged based on how we responded to the poor, needy, and suffering in our midst. 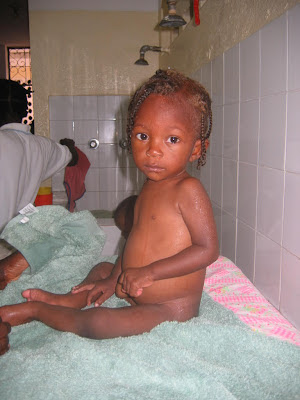 “It’s clearly a profound message about what it means to be a disciple of Jesus Christ. There aren’t a lot of other places where Jesus is so explicit about how we are going to be judged.”

“The Eucharist commits us to the poor,” she said, quoting the Catechism of the Catholic Church.

“The first and most fundamental theme, said Rosenhauer, is the life and dignity of the human person.

“This idea of the dignity of the human person changes everything—it’s a whole different world view,” she said.

“Within the social doctrine’s “tradition of action” there are two kinds of good work: the works of charity or service, and the works of justice.

“Charity addresses immediate needs, but working for justice means striving to address the underlying causes that create the needs that charity addresses…”

Bishop Jenky, OSF, and the OSF legal team in Peoria need to read this article in the Catholic Post and put the “tradition of thought” regarding sick and dying Haitian kids into the “tradition of action”.
Posted by John A. Carroll at 11:19 AM

Email ThisBlogThis!Share to TwitterShare to FacebookShare to Pinterest
Posted by John A. Carroll at 5:44 PM No comments:

Everyone is fair game to be taken. Haitians with means are leaving the country.

Parents are afraid to send their children to school. One did yesterday and the child did not come back.

Hospitals do not have adequate medications or bed capacity. Doctors working for the State of Haiti are not paid and go on strike frequently.

The psychiatric hospital in Port-au-Prince is full.

A Haitian policeman told me today that when people don't "put their heads together" and work out problems, "they can act like savages". He then asked me to buy him a car.

Only a few people on both sides of the Haitian economy are paralyzing this country.

People are running to get out of the capital. People are trying to leave the country.

Everyone is scared.
-----
My Comments in 2021--
I wrote the above in December 2006. Fifteen years ago. But I could use it today in 2021 if I were to post about Haiti today.
A pediatrician in Port au Prince was shot and killed today and his wife kidnapped. When does this madness end?
Haitians are afraid.
Posted by John A. Carroll at 6:42 PM No comments: 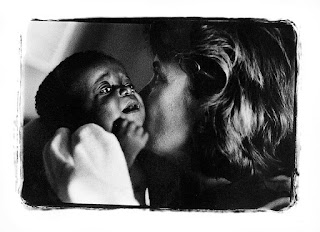 For the past five years I have been posting from the Journal Star website
in a blog called Dispatches from Haiti. There are approximately 400 hundred posts.

I posted this yesterday.

www.haitianhearts.org
Posted by John A. Carroll at 3:19 PM No comments:

John A Carroll shared a link.

Haiti’s new $83 million General Hospital still not built
Five years after a 7.0 earthquake damaged or destroyed more than 50 hospitals and clinics in Haiti, the heart of the country’s public health system is still struggling to recover.
MIAMIHERALD.COM
Posted by John A. Carroll at 1:14 PM No comments:

Forum: A big loss for Peoria
Dr. Dale Geiss, cardiac surgeon, recently moved his practice from Peoria to the Quad Cities. Dr. Geiss began his practice of adult and pediatric
PJSTAR.COM
Posted by John A. Carroll at 6:43 PM No comments:

John A Carroll shared a link.

Haiti--2014
Father Andre is the soothing force in northern Haiti. His announcements after Mass are the social media equivalent of Twitter but are much more important. Haitian officials request tourists but for...
BLOGS.PJSTAR.COM

As Haiti election delays continue, Aristides remains focus - Haiti - MiamiHerald.com
Defying a judge’s order, opposition leaders in Haiti plan to visit former President Jean-Bertrand Aristide, who was put under house arrest last week as part of an...
MIAMIHERALD.COM
Posted by John A. Carroll at 6:08 AM No comments: