Father Jean-Juste and Bob Moliere..."Haiti's Catholic Church is not Innocent in the Death of Father" 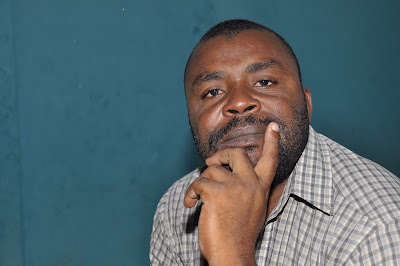 
Mr. Moliere is 41 years old and is the Coordinator of KONFALA grass roots movement of Lavalas. KONFALA is the acronym for Konbit National Fami Lavalas.

Mr. Moliere has been imprisoned in the past for his political views.

This was translated by me from Creole and is not word for word, but very close.

I asked Mr. Moliere about the recent death of Father Jean-Juste, the objectives of KONFALA, and what he wants the world to know about Haiti.

We only had two real men in Haiti. The first was President Aristide who is now in South Africa, and the second was Father Jean-Juste. The reason they were the only two real men was that they defended the rights of the poor.

Father Jean-Juste gave his life for the poor.

And the more a Haitian president wants to help the poor, the quicker the coup d’etat.

Haiti has been free for 200 years but the people suffer miserably. After we bury Father Jean-Juste tomorrow, we will continue to support the rights of the poor. We will invest in schools and “canteens popular”. We will continue Father’s movement. We are here. And we need to continue the same battle. It will be a non violent battle.

We think it will be a long battle.

I ask the international community not to donate money and goods to the government of Haiti. What goes in the right hand of the government quickly goes into their left hand and eventually makes its way back to the United States.

I ask you to tell international organizations and private people to “come here”. Help us here on the ground in Ti Plas Kazo and avoid the Haitian government.

Haiti really has no government. There is no one to defend the poor.

When a Haitian has a problem he has to solve it on his own. Every problem we have is our problem. When we (poor Haitians) need help, the Haitian government won’t help. The people in Gonaives know this. International money did not reach the people in Gonaives after the flooding.

Haiti is corrupt. Eleven year old girls are pregnant because they are hungry and sell their bodies for 25 gourdes.

One of the most important things that Father Jean-Juste did was to “presse” people to help each other. He got people jobs and sent them to school and feeds thousands of children every day here at Saint Claire's Church.

The Catholic hierarchy in Haiti did not help Father Jean-Juste when he was imprisoned. The Church leaders could have pressured the Haitian government by threatening that the Church would stop marriages and funerals in the Church unless Father was released from prison. But the Church did nothing except send Father a letter sanctioning him from helping the “people that suffer”.

After Father was arrested and thrown in jail, Monsignor Poupelard said that Father Jean-Juste should not be in "politics". But Father Jean-Juste’s politics was to “help the poor”. There is a “team” inside the Haitian Catholic church that does not support Haiti’s poor.

The Catholic Church in Haiti is not innocent in the death of Father Jean-Juste.

MINUSTAH needs to leave Haiti. They take the rich people’s money to beat down the poor people. Haiti has fallen even further with MINUSTAH here. Haiti is peace loving and doesn’t have guns. Why do we have an armed force here in Haiti? 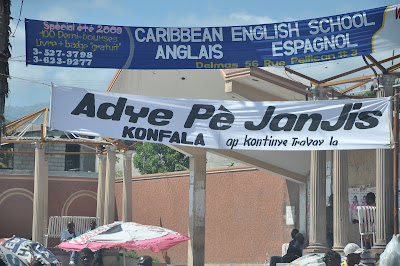 KONFALA will continue to struggle for the rights of the poor, the release of political leaders, and for the return of Jean-Bertrand Aristide. We will be non- violent. Lavalas, Haiti’s biggest political party, cannot be banned from elections.
Lavalas needs to be included.
Posted by John A. Carroll at 1:39 PM

Fighting against poverty in Haiti is entirely a respected work but it's not the same for certain people.I agree with almost what Bob has said to you dr Carroll.Lot of Haitians say every day "Grangou nan wel mwen" which means very starving.Father Jean-Juste was a man that i wished to me but unfortunately he's gone.This struggle goes on.We need more courageous men as Father Juste now.We will never forget about you Father Jean Juste.Rest in peace.

Thank you for this interview