Cholera and the Capital 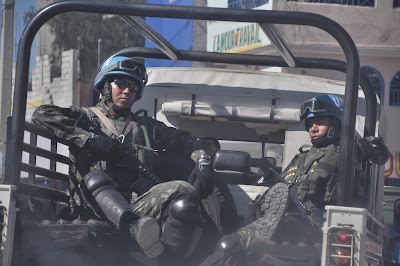 This week we have seen thousands of kids in the clinic and the hospital in Cite Soleil.

I have not checked one child who had a history consistent with cholera.

There are no confirmed cases of pediatric cholera in Saint Catherine's Hospital in Soleil either. We admit our sickest kids to this hospital which lies across a field from the pediatric clinic.

However, the kids seems sicker than usual. Lots of malnutrition, diarrhea, fever, colds.

And we have about 5 documented cases of malaria each week at the clinic in the back of Soleil.

Port-au-Prince and its slums do not need a cholera epidemic. I can't hardly think of a worse nightmare. Haiti is beyond fragile at this point and the people are suffering more than I have ever seen.

The BBC article posted below is ominous.

Suspected cholera cases have been reported from three more departments
Aid agencies in Haiti say they fear that suspected new cases of cholera might mean the epidemic is moving closer to the capital Port-au-Prince.

They said nearly 300 people were now known to have died in the cholera outbreak.

The UN is investigating allegations that excrement from Nepalese peacekeepers caused the epidemic.

Continue reading the main story Related storiesFears Haiti cholera could spreadHaiti cholera deaths 'near 300'Cholera 'difficult to predict'
The Nepalese camp had become the object of local suspicion partly because cholera is very rare in Haiti but endemic in Nepal.

Tests taken from the peacekeepers' camp and adjacent waters last week were found to be negative, said a spokesperson for UN Secretary-General Ban Ki-moon.

Results from additional tests taken at the base this week were expected on Friday, added the spokesman, Martin Nesirky.

Sarah Jacobs from the aid organisation Save the Children told the BBC that 174 new cases of cholera were being investigated in the area around Arcahaie, a village in the northern Port-au-Prince district and about an hour's drive from the capital.

"These suspected cases are much nearer the capital," Ms Jacobs said.

"So if this is actually confirmed as cholera as we suspect it will be, it means that the cholera has spread, it's that much nearer to the capital. And that's the thing we really need to avoid," she added.

So far a handful of cases have been reported in Port-au-Prince, but they were all people who had contracted the disease in other parts of the country.

At least 292 people had died and more than 4,100 were being treated, PAHO deputy director Jon Kim Andrus said.

But the official case counts almost certainly underestimated the number of people infected, he added.

"We really don't know about communities where diarrhoea cases are occurring but not reaching health centres", Mr Andrus said.

Officials from the World Health Organisation recommended that Haiti should prepare for the disease to spread to Port-au-Prince and warned that the epidemic had not yet reached its peak.

On Wednesday, UN investigators took samples of waste from a UN base in Mirebalais after allegations that excrement from a newly arrived Nepalese peacekeeping unit had caused the epidemic.

The Associated Press news agency reported that local politicians blame the outbreak on the base, which is perched above the source of the Meille river, a tributary to the Artibonite river.

The Artibonite is regarded to be the source of most cholera infections on Haiti's central plateau.

The UN rejected the accusations, and said the Nepalese unit at the base used sealed septic tanks.

The spread of the disease has alarmed locals in the region, who have vented their fears on the doctors who have arrived to help them.

A treatment centre set up by the international medical charity MSF in Saint-Marc was attacked by angry locals, who said they were afraid that the facility would bring more cases of the disease to their town.

UN peacekeepers were drafted in to sort out the disturbance, and no injuries were reported.

Health experts say they expect the outbreak will soon lessen but the disease will eventually join malaria and tuberculosis in becoming endemic in Haiti.

The health ministry has said it will train 30,000 staff over the next few months to join the anti-cholera campaign.

Special treatment centres have been set up in the worst affected area around the Artibonite River, as well as in Port-au-Prince.

Some 1.3 million survivors of January's devastating earthquake are living in tent camps in and around the capital.

Poor sanitary conditions make the camps and slums vulnerable to cholera, which is caused by bacteria transmitted through contaminated water or food.

Cholera causes diarrhoea and vomiting leading to severe dehydration, and can kill within 24 hours, but is easily treated through rehydration and antibiotics.

The PAHO said there was a "high risk" cholera could also spread to the neighbouring Dominican Republic.

Authorities there had closed popular farmers' markets on the border but have now reopened them after establishing sanitary controls in the region, the Dominican Republic's health minister said.